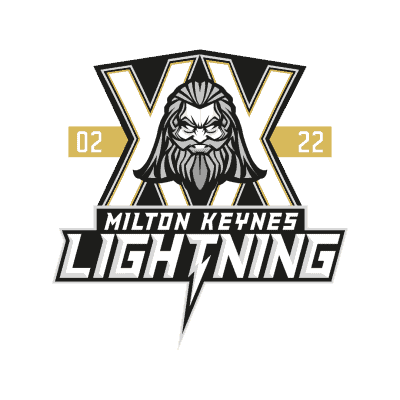 We are thrilled to mark Milton Keynes Lightning’s 20th anniversary designed by 123 Internet, and to kick off here’s our special anniversary logo which will appear on our jerseys and merchandise this year.

MKL superfan Mike Walls gave us a glimpse back to that very first season, with a view on our formation and some of the key players of that year:

“Milton Keynes Lightning were formed in the summer of 2002 replacing the MK Kings as the senior ice hockey side in Milton Keynes after a dispute between the Kings ownership and rink operators, Planet Ice – the Kings relocating to Solihull.

The Lightning took to the ice in the EPIHL with their first competitive game being a 7-7 tie with Romford Raiders, the game-tying goal coming from player-coach, Nick Poole, in the last minute of the game. The first ever MK Lightning goal is credited to Greg Randall. Their inaugural season saw the Lightning, with a mix of local British players along with Canadians Poole, Dwayne Newman and Claude Dumas plus Finnish forward Mikko Skinnari, finish second in the league. MK would miss out on both the league and cup to rivals Peterborough Phantoms; however, they would finish their debut season with silverware defeating the Phantoms 16-4 on aggregate in the play-off final.

MKL made the most of their Olympic sized ice pad in their first season, playing a system with fast wingers led by British forward Gary Clarke. This tactic did see the Lightning struggle on smaller ice pads at rinks such as Romford, Peterborough and the Isle of Wight with not being able to compete with the physical play in smaller rinks. This was addressed ahead of their second season with the signings of Michael “Muzzy” Wales from Invicta Dynamos and Kurt Irvine from Coventry Blaze. This added toughness to the team. A young forward from Durham signed from the Isle of Wight as well, with Adam Carr joining the Lightning attack from the Raiders.?

Over the course of this year, we will be running some special events to mark the anniversary, as well as wearing this unique anniversary logo.

Thank you all for your support, whether for the full 20 years, or brand new, we are truly grateful to have you with us.  We look forward to marking this special year with you over the course of the season.

Read more about the history of MKL here

Sign up with your email address to receive news and updates.

Page load link
Manage Cookie Consent
To provide the best experiences, we use technologies like cookies to store and/or access device information. Consenting to these technologies will allow us to process data such as browsing behaviour or unique IDs on this site. Not consenting or withdrawing consent, may adversely affect certain features and functions.
Manage options Manage services Manage vendors Read more about these purposes
View preferences
{title} {title} {title}
Go to Top